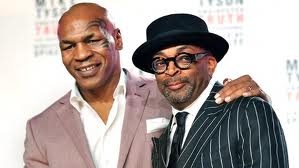 Broadway will welcome Spike Lee for the first time with Mike Tyson at Longacre theater for a limited run July 31- Aug 5.

Both New Yorkers will tell a story of Tyson’s highlights and lowlights. Lee: “It’s my honor to be making our Broadway debut together. Brooklyn to Broadway.”

The show was created by SPI Entertainment and written by Tyson’s wife Kiki Tyson.

Tyson most recently appeared in The Hangover and its sequel and starred in Animal Planet’s Taking on Tyson.

Lee is working on a remake of the Asian hit Oldboy. His Red Hook Summer, which premiered at Sundance this year, hits theaters in August.